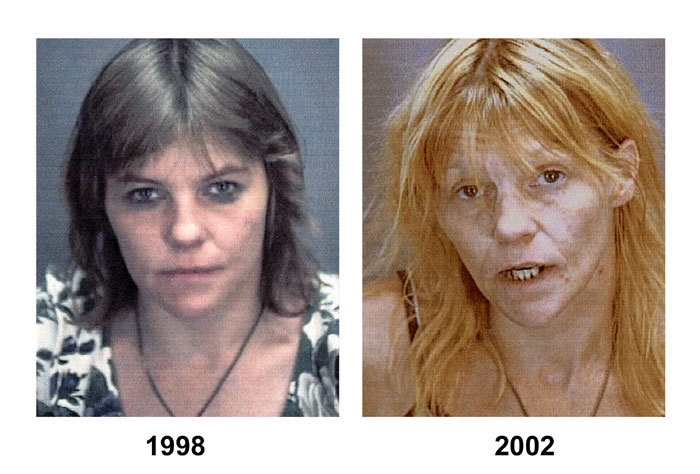 As with nearly all drugs, there are numerous meth side effects. The most common are insomnia, agitation, irritability, dry mouth, sweating, and heart palpitations. Also the user’s body temperature increases, as does their breathing and heart rate. Additionally, their blood pressure is elevated and people with cardiac or blood pressure problems may cause further damage to their cardiovascular systems.
What is meth?
Methamphetamine is a stimulant drug chemically related to amphetamine but with stronger effects on the central nervous system. Use of this drug has spread to all areas of the United States and continues to be on an upswing. Street names include "speed," "meth," "crystal," and "crank." This drug is used in pill and powdered form (snorting or injecting). Crystallized methamphetamine known as "ice," "crystal," or "glass," is a smokable and more powerful form of the drug.
Meth side effects include behavioral problems, paranoia, and psychosis. These problems are experienced most often by users who have a predisposition to mental illness. The user’s mood can become unpredictable. Mood swings, suspicion, anger, and depression are frequent meth side effects for those who abuse the drug regularly. Their relationships and general social interactions are negatively affected as well.
The most disturbing meth side effects include the classic meth-user look of a wounded face and a collapsed jaw. Because this drug is similar to a super Sudafed, it dries out the user’s skin completely. Addicts begin to believe they are suffering from “meth lice.” This leads to frantic scratching of the face using fingernails or any other tool such as tweezers. This process is generally known as picking. Picking can lead to serious self-inflicted wounds, especially in the face. Another physical sign is rotten teeth and a collapsing jaw. This drug dries out the gum tissue and leads to grinding of the teeth and ultimately collapsing of the jaw inward. Other physical meth side effects include a flushed appearance, severe weight loss, boundless energy, deep sleep patterns, and excessive sweating.
On an emotional level, meth side effects can be equally visible and devastating. They include irresponsibility, child neglect, and crime (most often to pay for the drug). A single puff of crystal meth can keep an user high for 24 hours, unlike cocaine or heroin which only last for a couple of hours. For someone on the mend or looking to sustain their habit, this can lead to serious bouts of violence, paranoid schizophrenia, and suicidal tendencies.
Any form of drug misuse or addiction comes at a cost to the user and meth is no different. Meth addiction can sometimes cause permanent life-altering changes. Work, relationships, and the ability to live day to day are affected. Crime, drug busts, restricted job prospects, visa denials, jail, and serious healthcare issues are just some of the things that are effects by one’s meth addiction.
Meth side effects include but are not limited to: